Eat These Foods to Boost Your Immune System! 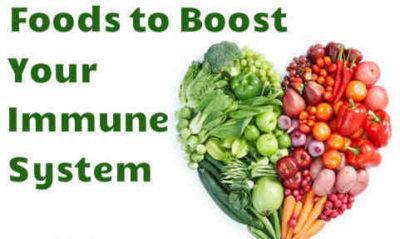 With winter in full swing, we are now in the midst of this year’s cold and flu season. This could drastically increase your chance of becoming ill. Plan your meals to include these powerful immune system boosters to fend off bugs before anyone gets sick.

Tip: Look for color in the foods you choose. Colorful foods often give a clue that they contain these important antioxidants.

It is no surprise that the most commonly recognized source to boost your immune system and keep your skin healthy is vitamin C. Vitamin C tops the charts of foods that keep your immune system running healthy.. Vitamin C increases the production of white blood cells, which are key to fighting infections. Vitamin C can be found in almost all citrus fruits, but an unknown fact is that red bell peppers have twice as much fighting power, as well as being a rich source of beta-carotene. Blueberries, strawberries, and raspberries are also good sources.

Broccoli is another super food that is loaded with vitamins and minerals ready to do battle against any germ or infection. Broccoli is one of the healthiest vegetables you can put on your table. It’s loaded with vitamins A, C, and E as well as an abundant amount of antioxidants. However, it is important to remember that broccoli loses its fighting power the more you cook it.

Garlic is found in almost every cuisine in the world and modern science has shown that it helps lower cholesterol, prevent hardening of the arteries, and fight infections.

Vitamin E tends to take a backseat to vitamin C when it comes to preventing colds; however, it is equally important. Since vitamin E is a fat-soluble vitamin, it needs the presence of fat to be absorbed. Nuts, especially almonds, are packed with vitamin E and a half cup a day provides nearly 100% of the RDA.

Spinach is another super food that’s rich in vitamin C, anti-oxidants, and beta-carotene. Similar to broccoli, spinach is best if cooked as little as possible so that it’s nutrients can be retained.

Much like vitamin C, ginger can also help you prevent a cold before it even shows up. Ginger is used in many sweet desserts, but it can also be added to many different dishes.

Food cravings. Everyone gets them at some point or another, but only a few are able to truly handle the intense craving to maneuver past them. If you often find yourself giving into food cravings on your diet program, it’s time that you put together a ...

Vinegar is one of those items that can be useful in just about every room in your house. It can even be useful for pets, as you will read below. Vinegar, which means “sour wine” in French has been around for centuries. It can be made from any ...

If You Do One Thing This Week…Stretch!

Many of our lifestyles are constantly go, go, go leaving little room for even moderately healthy food options. Convenience food makes it incredibly easy for you to skip the good stuff and onto the chips and cheese dips! ...

4 Reasons to Hire a Personal Trainer

If you’re looking to get started on a health and fitness program, one thing that you should give some consideration to is hiring a personal trainer. ...

Many people start the year off great and then the Super Bowl comes and then they fall completely off the wagon. Tacos, wings, chili, pizza, dips, chips and all that diet busting stuff looking you straight in the face saying “eat me”. There are a few ...